What a week it has been at the Provident CRM SB20 World Championship! The participants have experienced all types of Irish weather from rainy squalls to blasting sunshine. If the wind worked more on a decline from howling 30 knots on Monday to a light and shifty breeze on the last day, the emotions, on the contrary, kept heating up.

Day 4 finished with John Pollard’s team Xcellent at the top of the leaderboard with a four point advantage. Day 5 was decisive, because after the top two teams the 3rd place could be taken by at least three teams. With three races on Day 5 the participants gained another discard and that’s when their top results earlier this week became crucial.

On Day 5 the Race Committee was determined to run thee races to complete the planned 12 races schedule for this Championship. The first warning signal time was moved earlier to 11h00 and there was fear of breeze dropping making the last day very stressful for some of the teams even before it started.

The game was on with the gun for Race 10 firing on time. The breeze was more from the West and shifting constantly. A 4m tide still coming in at the time of Race 10 probably helped to avoid general recall. All races were started on Uniform flag and you could hear PRO David Lovegrove asking the fleet on the radio to cooperate and try to not go over the line delaying the start.

Racing on Day 5 looked more like a chess game with positions changing all the time. First race of the day was won by French Youth team of Ian Garreta from Antibes, their only bullet this week. They sailed well on the first racing day of the championship and made it to top 3 that day. Nils Razmilovic in 2nd after a nice recovery from 7th place on the first rounding. Locals Leviathan took their third podium finish closing top 3 in Race 10.

Race 11 was a bit of a pain. It started with a general recall after the RC recorded a 30 degrees shift. prior to the start The skies turned dark and a big cloud appeared over the left hand-side of the racecourse. French team of Corentin Goulon arrived first at the upwind mark and continued with a good speed. TED were behind them. Unable to overtake the lighter in weight French youth team they finished second, team AP Hotels & Resorts in third.

By 14H15 it was starting to get close to the time limit, while the wind was playing tricks with the Race Committee. Orange flag, black flag and we’re into racing with a clear start! This was Vasco Serpa’s race after the start. He rounded first ahead of TED followed by Glasgow Kiss and AP Hotels. On the downwinds in Race 12 Vasco, TED and Nils all favoured the right hand-side. It was only AP Hotels in the top of the fleet who went to the left. It paid both times. After their first rounding in 7th or so the come back was phenomenal. Top sailing skills in action and a pleasure to watch! They climbed 4 places and took 3rd overall on a photo-finish with Glasgow Kiss. Michael O’Connor and Vasco Serpa scoring 1 and 2nd accordingly, having battled with each other several times.

A week before the event some of the Class members shared their thoughts on who can win this Championship. They wanted to see Nils Razmilovic improve his last year’s result and not only his team Glasgow Kiss won the bronze, but also topped the Corinthian fleet. The guessing of John Pollard with Jack and Henry Wetherell taking a top spot resulted in Xcellent’s silver. Back then team AP Hotels & Resorts in its winning setup of one of the best Portuguese helmsman and the best tactician in the fleet didn’t even exist. Congratulations, Jose Paulo, Artem Basalkin, Gonçalo Lopes and Carlota Gala! 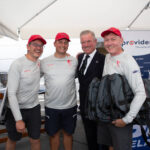 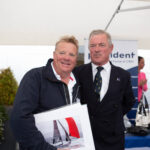 And here we are a week later with an amazing fleet of sailors of all ages and genders. Three young local sailors joined our international teams this week stepping in for last minute drop outs. The female part of the fleet is growing and we are happy to congratulate Julia Freespirit from Ukraine, who despite all obstacles found a crew and joined the event almost last minute. #GameChanger was the winner in the Female category out of 5 other teams: KIDZINK with Libby Greenhalgh helming and YALLA SHAMAL! of Rachel Blackburn both from the UAE, Lupi d’Irlanda of Emma Crane and Sneaky B of Charlotte O’Kelly both from Ireland.

With the SB20 Worlds 2024 coming in Dubai it was great to have all the UAE teams and welcome them to the international level of SB20 racing. “See you in Dubai 2024” spinnakers were flying over the racecourse showing a good level of competitive sailing. We hope to see them at other international events until February 2024.

We had 7 fantastic youth teams that came from four countries. The best youth team title went to Ares from Tasmania, who finished 7th overall. Congratulations, Will, Eddie, Ed and Eirni, you’ve showed us some great sailing having scored two bullets in this competitive international fleet!

Vasco Serpa didn’t win this time, but he was super close and he definitely won the Appreciation Award from the fleet! Not only a great competition on the water, when he’s not sailing and your sails are stuck or lost on the way, your boat is missing for whatever reason or there is another almost impossible task to sort out, Vasco will be your man! At least three boats travelled to Dun Laoghaire so that the Australian and Singapore teams could join us. The Class is very lucky to have SailCascais onboard!

Hein Ryuten, who didn’t compete himself this time, our Dutch SB20 boat charterer, also helped in delivering boats from the Netherlands and for next year he will be the one to talk to as well. We are grateful to the Royal Irish Yacht Club for great hospitality and all the technical support that has been as brilliant as ever.

Best three Day leaders were recognised and received their framed photos, they were team Xcellent, Glasgow Kiss and AP Hotels & Resorts. The Nation’s Cup will be travelling to the UK this year, first time in five years of World Championships.

In the Masters category team 3J’s form the Netherlands of Jeroen van der Velden were best and finished the Championship in the 12th position. Good testing for the Dutch teams on Dublin Bay, it was great to have such a strong presence and we are proud that Youth sailing is supported on serious level in the Netherlands. 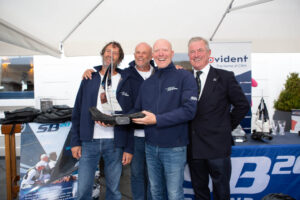 Awesome stories from the Singapore gang, who first saw a seal out of a zoo here in Dublin bay and how they surprised the locals by putting sunscreen. At the next SB20 event if you meet a guy called Storm (Storm van Leeuwen – which means “from Lions”), remember this name. Apparently he can splice your Dyneema in minutes! P. S. Don’t forget to buy him a beer.

Friends have been made and, again, SB20 World Championship brought together an amazing mix of people from all over the world. Plans have been settled and next we are going to the Netherlands to experience the North Sea in Scheveningen. Start learning how to pronounce that!

The 2023 World Championship is less than a year away, which means that the rollercoaster of emotions, catching up with friends and making new ones, picking up crew (and maybe winning the Championship) will be again on the table.