The fourth day of the Provident CRM SB20 World Championships was expected to be tricky. There was a lighter breeze on the forecast and the fleet was getting a bit exhausted by two days of heavy winds. Day 4 was very different from the first two days of racing with the Easterly breeze constantly shifting. And with the full moon approaching the big tide was against the wind, which made it a bit difficult to run all the starts clearly. The Race Committee and the fleet seemed to work together on the mission to run 4 races on this day.

For those at the top of the fleet the task was to stay out of trouble, get round the course clean and fast, which for most of them has worked out quite well. Race 6 opened the day with a general recall, when too many boats jumped over the line. The second attempt on Black flag “only just” made it to be a clear start. The fleet went to the left for better wind, but some boats chose to go to the right side.

The tide started turning by then and many boats from the right hand-side made it to the windward mark first. The first on the rounding was Team Caledonia of Tugdual Piriou sailing with Theo Bore, Emmanuelle Tora and Laure Galley (Mini 6,50 sailor from La Rochelle). Following them – local team Leviathan of Tadgh Donnelly, who also sailed well in Race 1 with a finish in 6th. They missed yesterday due to damage on the boat, otherwise we would probably see them higher on the leaderboard today. They managed to get the lead on the downwind on the right hand-side and arrived at the gate first.

The wind dropped to 11 knots and the course was shortened. All the “usual suspects” (previous days’ leaders) were rounding mid-fleet with slightly sour faces. It was good to see Provident CRM’s boat back in action with their bright new orange spinnaker – it looked beautiful! On the second upwind many boats favoured the right hand-side, but it was too late to catch Leviathan. On the second downwind they have gained a huge advantage, thus securing a comfortable win. At the finish line they were followed by Carnage of Robin Kirby from Warsash Sailing Club. New Caledonia finished in third place. RIYC Commodore Jerry Dowling and his team Bad/Kilcullen finished 4th – their best results so far. In 5th place we saw team SportsBoat World Racing helmed by Oliver Love sailing with Liam Pardy who all looked very happy on the finish line.

Six placed boat in Race 6 was Great White Lies of Sarah and Bruce Kemp sailing withAndy Williams. It is another example of almost spontaneous arrangement. Local dinghy sailors, they showed up at the Club earlier this year looking at event calendar for the one to join. And the SB20 World Championship looked good enough to them! They bought an SB20 and now enjoy the fun of sailing against top talent having sailed not a bad race as well. Truly, SB20 Class is for everyone!

It was late lunchtime when the fleet had already finished a race and was getting ready for Race 7 under Uniform flag. To everyone’s relief it was “clear start” from first attempt. The boat again favoured the left side catching the wind shift. Those who arrived to the top mark first, like Solyd Sailing Team/SailCascais avoided the “organised mess” that a rounding of 50 boats is. Shouting and penalty whistles were heard for the duration of the process.

On the second downwind most of the fleet went left, but Vasco Serpa stayed on the right and was leading until Youth team Ares overtook them flying over the racecourse. After that it was easy for the Aussies to finish the flight to the gate and score a bullet. Two Portuguese teams Solyd Sailing Team/SailCascais and AP Hotels & Resorts followed in 2nd and 3rd. Nice race for Shoestring Express who were 4th and Bad/Kilcullen in 5th and a nice come back for TED from the end of the fleet after a bit of spinning at the upwind mark.

Race 8 faced some difficulties with setting the start line, but by 15:02 the fleet was racing again under a black flag. Three boats got UFD for jumping the line too soon. TED started the race with a lead. Australian Youth Ares was around 10-12th place with AP Hotels near them. Brett Cooper overtook on the second downwind and lead the way to the finish line, followed by Leviathan, who sailed another good race scoring their second podium finish (2). TED ended up in third.

The start of the last race for the day was called at 16:25 with plenty of time before the live concert that awaited the participant back at the Club in the evening. Several top teams were favouring the left hand-side, but Vasco was on the right stretching it for the layline. TED and Bad/Kilcullen approached the mark together, but a nasty twist on the spinnaker didn’t allow them to hoist it, resulting in losing a couple of places to TED and AP Hotels.

The hopes for a bullet were still high on TED after being overtaken by America’s Cup and Olympic sailors in Race 8 and the desire to defend National title was strong. On the second upwind rounding, coming second they faced a port-tacked Breaking Bod taking in front of them separating them from that 1st result even more. Another effort downwind and they made it in the second place after AP Hotels with Vasco Serpa finishing in 3rd.

“Great variability of wind and waves today, very different to the first two racing days. We had lots of different winners, lots of youth teams were doing very well. If you look at the first race (Race 6) particularly – if you look at the scorecard you will see lots os people not being near the front enjoyed the shift off the start, made it really well. So it was great to see a different podium today. The guys on AP Hotels & Resorts are a class, it will take John Pollard quite a lot of work to beat them.”

So where are we standing for the last day of the Championship? The game is getting hotter and all the top five leaders probably still have a chance for a podium. Glasgow Kiss had a bad day with their best result in 9th place in Race 9. They are tied on points with Youth team Ares who are currently placed in 4th, they have scored two bullets overall. John Pollard was very careful today and avoided mistakes. Having gained 29 point in addition to 10 that he had from the first two days he continues to lead the Championship. Only four points behind them are AP Hotels & Resorts, who have 3 bullets and 2 podium finishes, which is better that Pollard’s 2,2 & 1. Vasco Serpa with 54 points and looking relaxed (as usual, who ever saw Vasco being worried?) is currently third, but with one day left to compete the third place will be most desired. 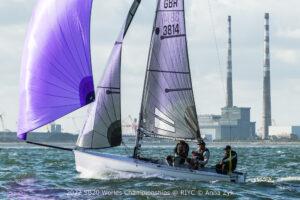 For the last racing day the RC has moved the first warning signal to 11 and plans to run three races. With the efficiency and smoothness that PRO David Lovegrove has managed a day of four races we have a good chance to complete all 12 that had been planned for this Championship. Another discard will also come handy after today’s tricky racing. We will find out soon!