The Royal Malta Yacht Club and the SB20 Malta Association have announced that Malta won the bid to host the 2024 SB20 European Championships between September 29 and October 5, 2024.

The rapid growth enjoyed by the SB20 class worldwide was also experienced in Malta. Since its inception in 2015, the local SB20 community has thrived, with regular regattas raced as a circuit held in different localities. The popularity of the class is mostly derived from the fact that it is a one-design meaning that everyone races the same type of boat, fair and square. Racing is not depending on the amount of technology invested but depends on the team’s combined ability on the day.

Malta’s potential as a sailing destination has been recognised through the winning of this bid which will attract a large number of SB20 sailors in Europe. Clifton Grima, the Minister for Education, Sport, Youth, Research, and Innovation, welcomed the news that Malta had won the bid. He said that this is another feather in the cap for the Royal Malta Yacht Club, the SB20 Malta Association and for our country.

“We are proud that Malta is once again hosting a European sporting event, which will be attracting enthusiasts from all over Europe for the prestigious SB20 boat race. This event will again put Malta on the sporting map, underlining our commitment to get international events to our shores,” Dr Grima said. 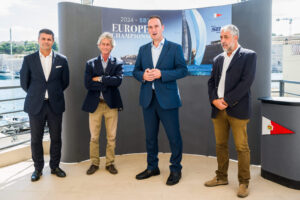 On his part, Steve Carter, president of the SB20 Malta Association, said: “Although the event will take place in 2024, Malta’s successful bid has generated a lot of interest from our European counterparts, many of whom know of Malta’s sailing reputation by word of mouth.

“We are already working hard to give them the best experience ever, which hopefully will result in them visiting the island for potential training camps as well as sailing with our local fleet.”

The Royal Malta Yacht Club will be co-hosting this event having a strong background in race organisation. The club’s flagship event is the Rolex Middle Sea Race which starts soon on 22nd October 2022. The RMYC has also hosted other events which were supported by international bodies such as EurILCA and World Sailing.

The Championship Organisational Committee is committed to do its utmost to facilitate logistics with the aim to achieve the largest ever number of participation attending an SB20 European Championships. Beyond sailing and good wind, Malta has a lot to offer. Great weather, beaches, crystal clear waters, history, culture, clubbing and the local Mediterranean cuisine and all within close proximity of the Royal Malta Yacht Club.