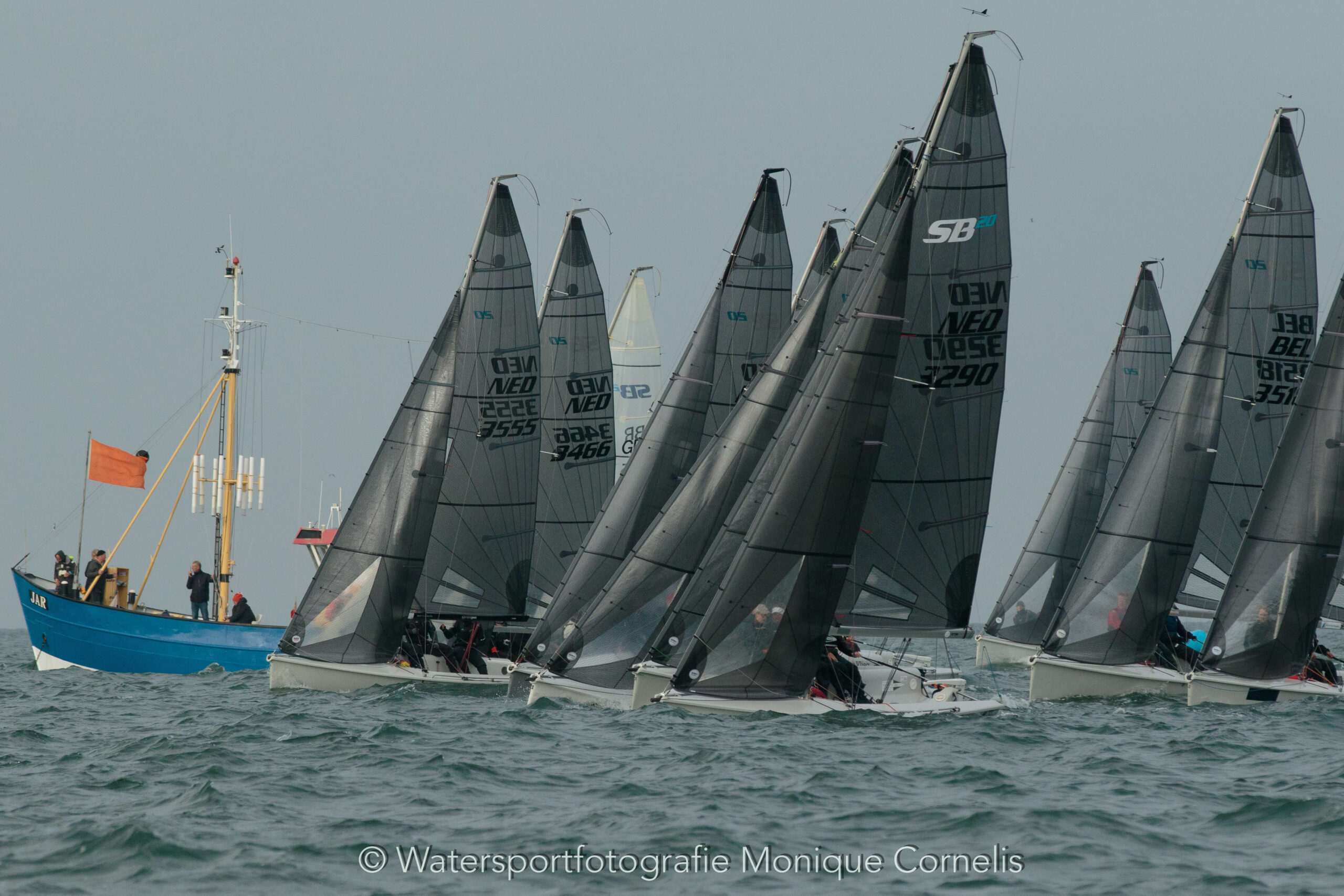 Perfect rehearsal for 2023 Worlds in Scheveningen

October 14th to 16th witnessed the Dutch SB20 fleets compete in its annual Open National Championship with a record number of boats. 23 teams have travelled to Scheveningen, The Hague hoping to win the title of the North Sea master in its turbulent waters. The foreign flags were represented by two Belgian teams, one French and a team from Lichtenstein of Dutch owner and crew. This three-day event was under a threat of bad weather, but apart from some rain and light winds on the first two days, the sailors were blessed with great conditions.

Friday racing started with four races in difficult conditions of gusty and shifty wind, accompanied by up to 1-knot turning tide, which added extra difficulty. In the opening race it was team MXTC of Marco van Driel, winner of 2022 Open Belgian Nationals, who has mastered the tricky conditions of the North Sea. An unfortunate 14th finish in Race 2 has affected Marco’s position at the end of the day. Top Dutch team 3J’s of Jeroen van der Velden, winners in the Master category in this year’s Worlds, also sailed a consistent day with two 2nd results, one 3rd and 6th giving them a good start. However, the leader on Day 1 was Bart Tytgat on “Go with the flow” from Belgium, who scored two bullets, 8th and 2nd. Bart Tytgat has admitted that the first race of the event was the most difficult in the whole championship: “We had to keep our heads up and motivate ourselves for the rest of the event”.

On Saturday similar conditions as on Day 1 have greeted the 23-strong fleet at Jacht Club Scheveningen, where perfect organisation also awaited from the Race Committee and the safety team. Scheveningen harbour is a busy area with lots of finishing boats and big ships entering and going out to sea, so supervised navigation and boats towing was provided for the participants.

Day two has seen different teams getting top scores. Buitenhuis Advies of Martijn Buitenhuis has invited Franck Dobbels from Belgium to join him and his regular crew Mark Reigwein. Together they scored impressive two bullets in the first two races of the day. Conditions remained challenging, resulting in some UFDs across the fleet.

Yves de Block who sailed with Ronald Veraar on NED3041, says they were clear in Race 5 according to their Sailmon MAX: “It must have been the tide that moved the mark and it looked like we were early. Sailing in tidal waters definitely adds a different dimension to play with!” Scheveningen is an interesting area to sail, where you have to do a lot of weather analysis and choose your course carefully.

“You need to play well with the tide, which is also affected by the harbour entrance close to the racing area. We really appreciated daily weather briefing ahead of racing by experienced ocean sailor and navigator Jolbert van Dijk. It helped us to adjust to North Sea conditions as we are used to sailing in the Med,” – concluded Yves.

The team of Ronald Veraar only entered the championship a week before the event because Hein Ruyten wasn’t able to compete and had left a boat available. Having never sailed SB20 before it took some time for the team to adjust, but in the end they’ve enjoyed the perfect SB20 downwind planning on the last day of the championship. Ronald and his team come from the Melges 24 Class, but as experienced sailor, who also used to sail J22s back in early 2000’s, he is no stranger to competitive racing. Who knows, maybe after this National Championship we will see Ronald and his team in SB20 Worlds 2023 next year!

Tricky conditions of the North Sea have allowed a number of teams in Top 10 to achieve podium finishes on the first two days. This resulted in a very close racing at the top of the fleet with just a few points separating them.

On the last day the sailors were rewarded with fantastic weather of 25 knots and big waves to surf on. The final battle was on with 3J’s entering the day in the leading position chased by “Go with the flow” and MXTC. 3J’s only had to finish ahead of Bart Tytgat to claim national title. Unfortunately they haven’t managed to sail a good race and finished around the 10th place, having also learned they had an UFD. 3J’s finished second overall and MXTC won the bronze. Ronald Veraar has closed the event with a spectacular win in the last race which placed them in 4th position overall.

Bart Tytgat was pleased with his second consecutive Open Dutch National title: “Racing was very close. The level in the Netherlands is going up very fast, as well as the number of boats. In 2021 and 2022 the Dutch boats won our [Open] Belgian Nationals (3J’s and MXTC). So it feels good to have revenge in the Netherlands!”

Many participants have highlighted the perfect work of the hosting Jacht Club Scheveningen. Sailors felt safe in big waves and high winds as well as during docking operations in and out of the harbour. Apart from top organisation every boat was equipped with a Sailmon MAX device for tracking. The teams have enjoyed some drone footage and data analytics at debrief session after racing provided by Sailmon. The social part could not have been better with dinners, drinks and receptions for all fleet members. A raffle with prizes from Dubarry, Hein Ruyter and special treats from Class sponsors, such as Secrid made it an unforgettable regatta!

It is already obvious that the success of the 2022 Dutch Nationals will develop into solid numbers on the registration list for the SB20 Worlds 2023. This strong fleet of experienced sailors is also joined by regular youth teams, some of whom are supported by Dutch universities and such companies as Buitenhuis Advies.

“We have been sponsoring the Broach Association for students from Delft University of Technology for some time now,” – says Martijn Buitenhuis, Managing Partner of Buitenhuis Advies. “Youth talent development is one of the key stones of the SB20 Class in the Netherlands. From our professional point of view, we also have a strong belief in talent development and sailing is a skill which helps to set goals, to excel in teamwork and to adapt to different circumstances. We are committed to further promote this talent development in coming years.”

Dutch SB20 Association makes the successful combination for SB20 World Championships clear: competitive fleet consisting of experienced and young sailors, great regatta organisation by Race Committee and the Yacht Club with fun social part for all participants joined by sponsors who are willing to showcase through the beautiful sport of sailing. With the sailing area in the North Sea this cocktail is served with great weather conditions, that local photographers will turn into fantastic memories that are not to be missed!