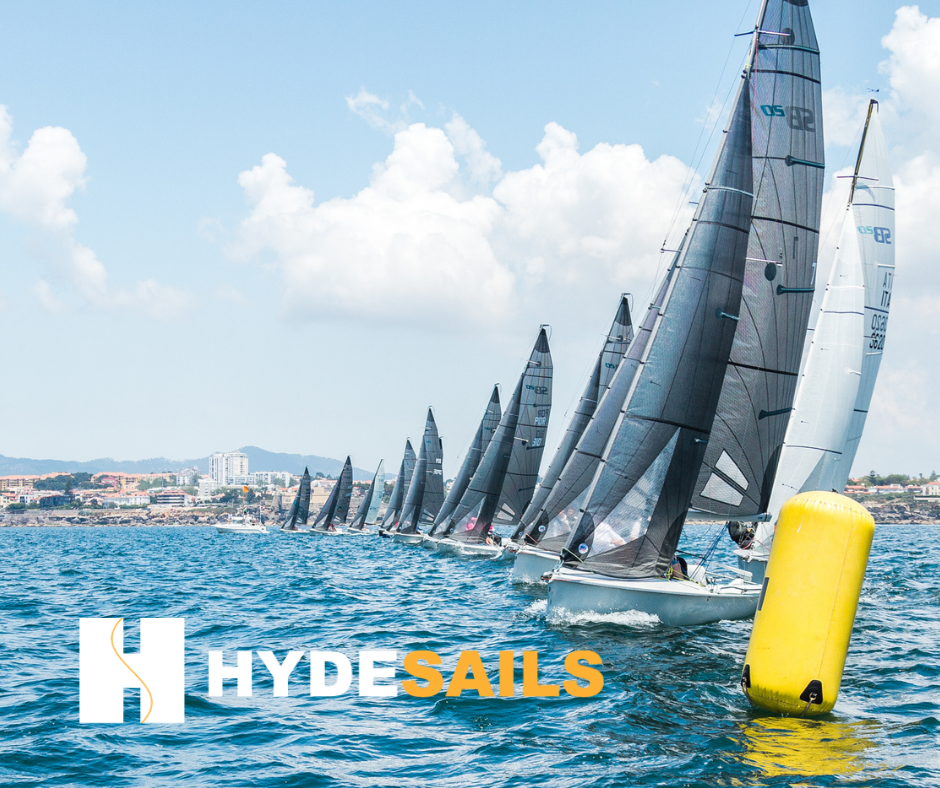 Hyde Sails One Design Manager, Ben McGrane, gives his view on the set up and sailing technique for the SB20. Working for both spar and sail manufacturers over the past 15 years along with multiple championship wins across numerous dinghy and keelboat classes, Ben has expert knowledge in how best to get the most from tuning and set up to achieve optimum performance.

Fundamental setup for fully powered sailing was as follows:

Cap shrouds – Should come under tension at the same time as the V1. They are only there for downwind so do not overtighten but at the same time they do not want to be loose. While it might sound a basic thing I cannot put enough emphasis on making sure the rig is vertical in the boat and that the rig has no S curve when sighting up the track. When getting to the base numbers be sure to also make sure the rig is in column to give the same performance on both tacks.

Primary rig adjustment. We generally kept the V1 so it was just tight in anything up to continually overpower conditions at which point I was then happy to keep increasing tension to minimise forestay sag. Max tension we recorded after sailing was 38 on the V1. My general view is it was better to be overpowered than under and we made adjustments of a single full turn to get the boat in the window where we felt we had the right balance of power that the boat was not stalling but also would not be power searching all the time. The backstay is really powerful and so I would lean towards being slightly overpowered than under and then use the backstay to compensate when required.

We moved these less than previous guides suggest. Reducing the V1 by 1-2 turns from the 32 base doesn’t seem to create to much of an issue if the wind increases, low D1 tensions in building pressure seemed far more detrimental. As a result we kept the D1 at 30 even when removing a turn from 32 on the V1 in light winds. If the wind was light enough to go 2 turns off on the V1 then we went 2 full turns on the D1 otherwise the rig ends up too straight for the luff curve of the mainsail and in those conditions (>5knots) you want to be flattening sails to encourage flow. At the other end of the scale the D1 tension was only increased from the base 30 when getting up to 36+ V1 tension and vang sheeting. At this point starvation creases appeared from the spreader to the clew of the main and we found we lacked height.

Again we keep this simple setting the jib so the centre of the foot was just clear of the deck, any lower and pointing became a problem. With the jib cunnigham we used enough to remove any sag between the hanks accept in very light winds when I was happy to run slight sag with a view to a flatter entry. With the tracks we were all the way inboard and only moved them out at the point where we were over power constantly and the only way to stop the mainsail back winding was to ease the jib sheet. This is all with a view on conditions, if it is gusty we used sheet adjustments, if it was stable strong winds we would be happy to track out.


ONCE ON THE WATER

With limited time in the boat I quickly became more comfortable with the mainsheet as the helmsman particularly in gusty conditions. There is a lot to be unlocked with boatspeed in the SB20 with very suitable changes in jib and mainsheet tension. Trimming the jib you have to be very careful to not go too tight and if at any point the boat seems a little slow a small ease on mainsheet and jib is quite often the solution. I found the boat responds a lot quicker to 30mm ease of mainsheet than going 100mm down on the traveller. Having the backstay to hand as the middle man also works very effectively in gusty conditions but it is important to make subtle changes and that all changes are clearly communicated otherwise you can all end up working against each other.

With more time in the boat I would explore this a lot more as in gusty conditions over 12 knots it always seemed quicker offering far better response to changes in pressure. If using vang sheeting we took an extra 2 turns on the vang lowers to compensate for the additional forward pressure so we didn’t end up with increased bend. With more time in the boat I would experiment with the D1 set up and combining with vang sheeting in more conditions over using the traveller.

Let the backstay go, a straight rig is good for a deep main. Vang can be eased more than most people think, aim for a lot of twist but find the balance between sheet and vang so that all the leech tell-tales stream at the same time. Trim the jib off the top set of tell tales, this will mean the base is slightly over-sheeted but it is a compromise to have the whole sail filling. Be careful to not over sheet the spinnaker, it seems to like a decent amount of curl on the luff and this also gives the helm a wider groove to sail without the rudder stalling in big breeze. The boat is very responsive to movements in weight, very much like a dinghy and so rewards movements fore and aft. Like most asymmetric boats it is a decision between modes, pretty much as low as you can get with the spinnaker filling or push high and get planning, once up and going there is definitely then an option to sail as low as you can in the planning mode. Sailing anywhere in between the very low and the heated and planning modes is pretty much just giving distance away as you do not gain enough speed to allow for the extra distance sailed.